The Village of Leopards

This is the fictional story of an African village standing up to a Western oil company, Pexton, which is poisoning their land, air and water, leading to the deaths of many children.  It reminds one of the actual situation on the Niger Delta, where Royal Dutch Shell, Elf, Chevron and others have ruined the wetlands with constant spills and explosions, oppressing the Ogoni people in the process.  This was also the situation in Ecuador, where Chevron did the same thing in the Amazonian jungle; and in Peru, where Repsol did the extraction destruction. 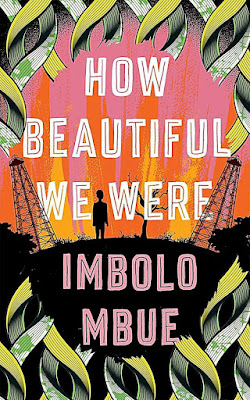 Mbue herself is from Cameroon, which is just south of Nigeria.  There is an actual French/Anglo oil company in Cameroon, Perenco. China’s Sinopec oil company bought control of a former Shell company, Pecten Cameroon Company, in that same country.  So ‘Pexton’ could be based on several of these outfits.

The African story is told from the point of view of one child, Thula, other children, Thula’s uncle Bongo, her mother Sahel, her grandmother Yaya, her little brother Juba.  It starts in the 1980s.  It is a very slow-moving and somewhat lyrical village and family story set in a formerly Edenic bush community of thatched huts, small farming, hunting and fishing named Kosawa. Now the children die mysteriously after drinking the water; the farms cannot produce good crops; the air is toxic from flares, leading to coughing and slow death; the river runs green and clotted; the pipelines leak oil.

A contingent of villagers go to the local capitol, Bézam, to try to get help and never return, including Thula’s father Malabo.  There is a kidnapping motivated by the local ‘crazy’ man Konga, a massacre by soldiers in which 14 are killed, a village chief who benefits from covering for the oil company but then switches sides and 4 villagers hung in a legal trial by ‘His Excellency’s” government.

Another village group locates a journalist in Bézam who tells their story to a U.S. newspaper in the ‘Great City’ of the U.S.  This stimulates some Americans to form the “Restoration Movement” that gets them a bit of money from Pexton for their misery, while investigating the disappearance of the local men and subsequent jailings.

The cheery side is that Thula eventually goes to the 'promised-land' in the U.S. to school, helped by the Restoration Movement. Mbue now lives in the U.S., so Thula could be based on the author.  In the story, especially Yaya’s, there are echoes of slavery snatchers, missionaries condemning everyone to hell, forced rubber labor on plantations – all echoes of colonialism.

Thula discovers that the U.S. has its own problems with leaking oil pipelines, poisoned water and air and flooding due to carbon-based climate change.  She understands the problem is bigger than her village.  Even the Pexton laborers are dying or being injured, while other villages have ‘oil’ problems too.  She writes back to Kosawa that they should use sabotage against Pexton, thus countering the failed NGO reform perspective of the Restoration Movement.  She realizes the real problem is the government of ‘His Excellency,’ which allowed this all to happen. The book covers years of patience and impatience, the lies of Pexton and even the Restoration Movement, fruitless meetings, magic, the buying and using of guns, talk of a peaceful revolution, an endless lawsuit, all in the context of extraordinary naiveté by the villagers.

Eventually Thula declares a peaceful ‘Day of Liberation” against the dictatorial ‘His Excellency.’  Evidently there is only one activist village in a whole country, with a simple program of getting rid of the dictator and his corporate cronies, led by one childless woman.  This is more fictional than anything else.  This book is really a liberal story about people who try to do good, not actually a revolutionary novel.  It does show the bind people are in when dealing with a violent state, a useless legal system, a powerful and rich corporation.  Like so many middle-class books its true focus is the village family, though how much interest a reader might have in them is questionable.

Does the ‘revolution’ succeed?  Will Pexton and the government be brought to heel?  Or will the misery for Kosawa and the nation continue?  You can guess.

And I bought it at May Day Books fiction section!