“Fashionopolis – the Price of Fast Fashion and the Future of Clothes” by Dana Thomas, 2019

This book includes a short history of the clothing industry, from its beginnings in 1771 in Manchester, England – ‘Cottonpolis’ as it was called then – to its spread to New York’s lower East Side and Garment District; and from there across the world, mostly to Asia. The ‘ready to wear’ industry was enabled first by slavery, machinery and colonialism, then by cheap labor, Quick-Response manufacturing, NAFTA, the WTO, the World Bank and China. Liz Claiborne and Zara were ‘trend setters.’ It results in landfills full of clothes, excessive water use, dye pollution, carbon production, lost jobs and grinding labor exploitation, mostly of women. What’s not to like? 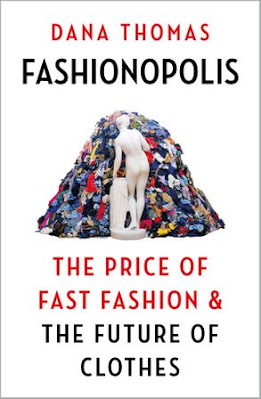 This is a very familiar capitalist story. I’m going to look at this book to see if Thomas has any specific solution that is out of the ordinary, other than the now commercially appropriated plea for ‘sustainability.’ Unless we stop treating clothing as a commodity, and greatly reduce our production and consumption of clothing, that solution alone is bogus. Her supposed focus is on ‘fast fashion’ too, so she might have an answer.

As a journalist, Thomas visits Bangladesh to look at conditions after the Bangladesh Fire and Building Safety Agreement, which took off after the horrific 2013 Rana Plaza collapse which killed 1,134 and injured 2,500. Now she says some Bangladeshi factories are pristine, while others are still dangerous sweatshops. She says little about unions, which are opposed by the Bangladeshi government. Then she details sweatshops in Los Angeles employing Latino women, which is now the textile capital of the U.S.

Jeans are made of cotton. It is estimated that at least half of everyone on the planet is wearing jeans at any moment. I doubt that, but it suggests how ubiquitous they are. I’m wearing a worn pair now. Thomas tells the story of Levi Strauss and another about organic cotton that grows green, brown and blue to avoid toxic dyes. She also interviews people growing indigo as a natural dye for denim, which has been adopted by Patagonia, but still 99% of clothing uses analine dyes, which are synthetic and cancer-causing. She has a long section on Southern small business owners in Florence, AL and Nashville, TN who create small-batch mail-order clothing and socks, mostly using organic cotton – one vertically grown in their own cotton fields. Many of the garments are expensive, as the words ‘bespoke,’ ‘boutique,’ 'selvedge,' 'made to order' and ‘artisanal’ suggest.

Thomas quotes an entrepreneur happy to move from LA to Nashville because the wages are so cheap in the open-shop South. Clearly Thomas is a pro-capitalist who finds cheap wages endearing if they come with a ‘local,’ ‘slow fashion’ and maybe an ‘organic’ label. Words like ‘union’ and ‘co-operative’ never cross her word processor in this context. She has written for Vogue, NY Times Style section, the Washington Post, Wall Street Journal, Conde Nast and others – so of course.

Thomas' next stories are about 'right-shoring' – a patriotic hipster word for returning manufacturing to the U.S. and England. This doesn't necessarily involve organic or raw materials – as one English person says it will resemble the 'imperial model' of textile production. Now above 10% of U.S. clothing is made in the U.S., up from 3%. The Chinese are partly behind this increase, as they have restarted plants in the Carolinas helped by revenue bonds, tax credits and infrastructure grants – all typical corporate welfare. She neutrally profiles one U.S. entreprenuer that believes the 'buy less, use less' strategy is “not scalable” and “not a realistic approach to climate change.” This one wants to be the new Zara. Her firm does attempt to use solar power and much less water in production, so Thomas includes her.

Another new concept behind making denim softer or actually 'distressed' - called 'finishing' - is something called the 3-step 'Jeanlogia' process – which is highly automated, using far less water and labor. According to Thomas, automation is the route for new production. Stone washing and hand-work softening or creating holes in jeans with sanders and power drills are highly toxic methods to the environment and the workers, as well as wrecking the fabric. However, Thomas does not address why jeans have to be softened at all, thus contradicting her point about making clothes last longer. Most 'softened' jeans quickly rip at the knees. So those wearing jeans for work or practical purposes find 'finishing' to be absurd. Those people running around trying to make a 'fashion statement' with ripped or paper-thin jeans are advertising the fact they don't use jeans for any practical purpose, wasting fabric at the same time.

Thomas celebrates Stellla McCartney's high-end fashion, which uses wool from a sustainable sheep farm in New Zealand, viscose and rayon from from Swedish and Canadian certified lumber forests, organic cotton grown in Egypt, and oil-based pleather. No fur or leather, which have a highly-destructive and anti-ecological animal sources. She includes almost nothing about McCartney's labor standards. McCartney eliminated ubiquitous and toxic polyvinyl chloride (PVC) from her clothing, recycling plastic ocean waste, stopped using virgin Mongolian cashmere, while using animal-free, bio-fermented leather and silk, along with mushroom leather. Thomas uses the cretinous stereotype “brown-clad, crunchy-granola set” to describe what is now seen as green, “conscious fashion.” It seems the hippies were right again...in spite of the insults. McCartney's firm also uses an “environmental profit and loss” accounting system. The problem of course is that none of us are wearing Stella McCartney.

Thomas mentions various methods of greenwashing and bluewashing by capitalist clothing companies. She highlights firms that recycle cotton T-shirts into new fiber, as part of a 'circular' economy in textiles. She supports long-lasting garments, not junk that deteriorates, including learning the art of sewing to repair and make clothes. One of her entrepreneur's rejected using Spandex, which is oil-based and doesn't break down, and discovered a bio-substitute. Another created a substitute for oil-based polyester. Others are finding ways to break clothing down into their original components, like nylon, or separating polyester and cotton, then recreating them individually instead of sending them to a landfill. Some firms (Patagonia again) run 'repair' operations for older clothing, or buy second-hand from their customers. Others promote 'made to order' or sample pre-orders to reduce overproduction. Even washing clothes less frequently will greatly extend their life.

For the future-future, Thomas blows hot on home-based clothing 3D printers - a modern sewing machine according to her. This seems odd for someone interested in sustainability, as the ingredients are nearly all polyamide powder, nylon, acrylics and polyurethane rubber. Robots and sewbots (“zero direct labor”) are also coming to garment manufacturing. Yet capital has no plan for those who lose their jobs. Digital sales are now huge, though 'brick and mortar' shopping is still real. Amazon's own line of clothing, Prime Wardrobe, bought a clothing factory for pre-orders to reduce waste.

In the final chapter called “To Buy or Not to Buy” she lays her cards on the table. After her endless celebration of various clothing methods and brands, she mentions – once – to buy less. That is not the line of this book at all. It is a detailed look at new methods in creating more sustainable clothing, a gold-mine of new environmental methods that are being used by small firms and fashion 'start-ups' creating mostly expensive, high quality clothes. But it fails in envisioning a real 'refashioning' of fashion from an anti-capitalist point of view – instead proposing a “kinder, gentler capitalism.” Good luck with that...

Prior blog reviews on this subject, use blog search box, upper left, to investigate our 15 year archive, using these terms: “Stiched-Up – the Anti-Capitalist Book of Fashion,” “Shopping World,” “Worn – A People's History of Clothing,” “Inconspicuous Consumption,” “Hippie Modernism – the Struggle for Utopia.”

And I got it at May Day Books!