“Scorched Earth – Beyond the Digital Age to a Post-Capitalist World” by Jonathan Crary, 2022

This is a train-full of quotes about the non-sustainable environmental nature of the internet matrix.  Then it flips over into familiar rhetoric about exploitative 24/7 time, terminal capitalism, the subverted role of science and the role of WWII in the triumph of U.S. technology and power – among other things.  It is written by a professor from Columbia in New York, who seems to be close to a form of anarcho-socialism.  He's inspired by utopian socialism, the 1960s counter-culture, workers' councils and multiple and various intellectuals.  In a 124 page book, he has 122 quotes, and that does not include the unquoted mentions, from Hannah Arendt to Simone Weil. 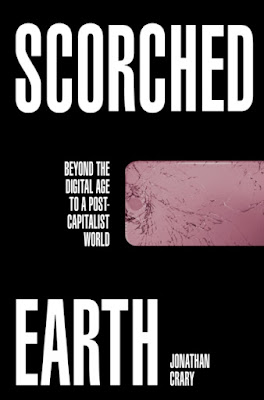 Crary has a familiar style – extravagant, ultimast language glorying in its own brilliance, pursuing a wandering argument.  I'm somewhat tired of this style, like every academic wants to be Zizek.  He denounces the internet, urbanism, corporate technology and science from a left point of view – but says almost nothing to explain what comes next.  Is the internet to be destroyed? Are cities to be dismantled?  Is technology and science to be ignored?  The Left is well-aware of the corporate/military misuse of technology and science. This is a tenured professor from New York City and seemingly is anti-technology too.  In his paeans to rurality he probably hasn't smelled manure in a life-time.

Finally on page 83, Crary says:  “...existing technical capabilities could be creatively redeployed by local and regional communities to meet human and environmental needs, rather than exclusively serving the requirements of capital and empire.”

His main focus is on opposing techno-modernism and biocide. But there is also the usual psychological and cultural twist. He insists the internet complex is “the implacable engine of addiction, loneliness, false hopes, cruelty, psychosis, indebtedness, squandered life, the corrosion of memory and social disintegration.”  It is introducing a world of homogenization at “the level of consciousness.”  This is how all propaganda systems work, but in this case ‘the medium really is the message’ because it now penetrates everything, unlike earlier attempts at totalizing systems.

Of especial interest to Crary is the vast mining push worldwide, especially for 'rare' earths and not so rare ones – copper. This is the source of the title – Scorched Earth. This rush for minerals is now centered on 'green' technology – batteries, server farms, cables, satellites, solar panels and wind turbines, smart homes, electric vehicles, along with the massive electrical and cooling demands created by a 24/7 streaming internet.  None of this will be sustainable and is already leading to more environmental destruction, inter-capitalist competition and war.

The 'good' and bloodiest capitalist war in history – WWII – was the moment when the U.S. version of carbon capitalism became ascendant worldwide, along with the development of the early military 'internet.'  This newest iteration – the 4th Industrial Revolution / digital / green capitalism - ignores the destructive and primary role of the commodity in the capital system.  Like the folks at 350.Org regarding carbon, he wants to leave the minerals in the ground – unlike 350.Org.  However, Crary has no plan for what comes next if this is done.

Crary makes a plea for 'face to face' contact and human interaction, in place of the alienated and individualized methods of the internet. He has a bit about tech billionaires trying to forestall death with cryogenics, drugs and freezing.  But as Marx might say, death proves dialectics. Crary ends the book with an odd chapter on bio-metrics and its 'focus' on the eye and iris, as computers attempt to analyze the eye in order to quantify human behavior and psychology, in a further attempt to read and colonize the human psyche.

Overall this book is a familiar one, and probably a waste of your time.

And I bought it at May Day Books!