The Cult of Expert Nonsense

“Psychology and Capitalism – the Manipulation of Mind,” by Ron Roberts, 2019

This short book centers on the uses of bourgeois psychology to capital in the realms of control and illusion.  Studies have shown that since neo-liberal capitalism was introduced in the late 1970s, rates of mental distress and deaths have increased markedly - suicide, alcohol and drug addiction leading the stats.  This has affected oppressed populations the most - and at present, especially 'white' middle-aged working class men.  Yet the methods of contemporary psychology and psychiatry center their treatment on individuals alone, with no historical or social content. They ignore how capital has configured society to create stress and misery. 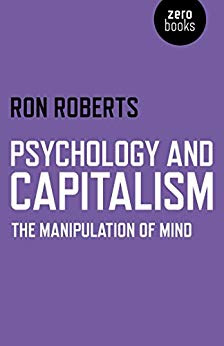 The psychological theories that are taught in college - Freud, Adler, Maslow, Jung, Skinner, Rogers, Erikson and others – all of them conflict.  This undermines any idea that psychology is a holistic science.  The present large division between talk therapy and biological drugs – the ‘couch and the brain scan’ approaches, as Roberts put it, also conflict, though biological reductionism is now the most prominent.  Roberts counts 11 modern forms of psychology at present - all of which are not integrated. These contradictions hint at the ideological aspect of modern psychology.

Roberts looks at the uses personality and character studies have, and how they enable military and corporate entities to control warfare and workers alike.  Pop psychologists on PBS offer up 4 aspects of personality while rigid individual categories like neurotic, introvert and extrovert, ‘passive aggressive,’ ‘the self,’ ‘A personality,’ ‘beta males,’ nature and nurture, narcissism, pessimism and optimism and especially intelligence fill common talk – all ahistorical and individualized, with questionable scientific bonifides.  Loneliness is the exception, as it is now commonly and obviously understood to be linked to social disconnection.

Roberts outlines the misuses of psychology as an insider.  He discusses military psychology and its collaboration with torture; advertising manipulation; IQ and the bogus aspects of twin studies; manipulated drug science tests and especially the ascendant role of the individual. As to the latter, he says this about current psychology: “…the individual is the primary reality … By amazing coincidence, it is also the cornerstone of ‘rational’ self interest and individualism upon which the entire field of (capitalist) economics is predicated.”  Corporate psychology pushed through HR departments is especially geared to getting the worker to be agreeable, conscientious, punctual, resilient and flexible.  Especially flexible!  Psychology essentially “privatizes responsibility” in Roberts' words.

Roberts looks at the Diagnostic and Statistical Manual (DSM) – the bible of psychology.  The categories were developed by committees, not by research.  Half of the members of DSM committees have ties to the pharmaceutical industry.  The National Institute of Mental Health no longer supports the DSM, calling it ‘unscientific.’  The PTSD category itself exposed the rest of the categories when it allowed that a war environment might affect emotions.  The other categories were however considered disconnected from social experience.

One stunner is that the Jason Bourne series (‘Treadstone’) is actually based on a real CIA program, MKUltra, which as one of its aspects attempted to train assassins to be able to do anything without compunction.  Following this, the ‘defense’ industry is the largest employer of psychologists.  This should give us all pause.

Roberts lists a few social psychologists who look at the links between society and individual functioning and concepts like fascism, alienation and consumer fetishism – Wilhelm Reich, Kenneth Gergen, Eric Fromm, R.D. Laing and Slavoj Zizek.  Yet their social psychology is absolutely marginal to the field as practiced now.

At the least, every psychology student should read this book.

P.S. - There is an excellent commentary on 'mindfulness' as a method of corporate and individualist quietism in The Guardian.  This book is now in stock at May Day:  https://www.theguardian.com/lifeandstyle/2019/jun/14/the-mindfulness-conspiracy-capitalist-spirituality